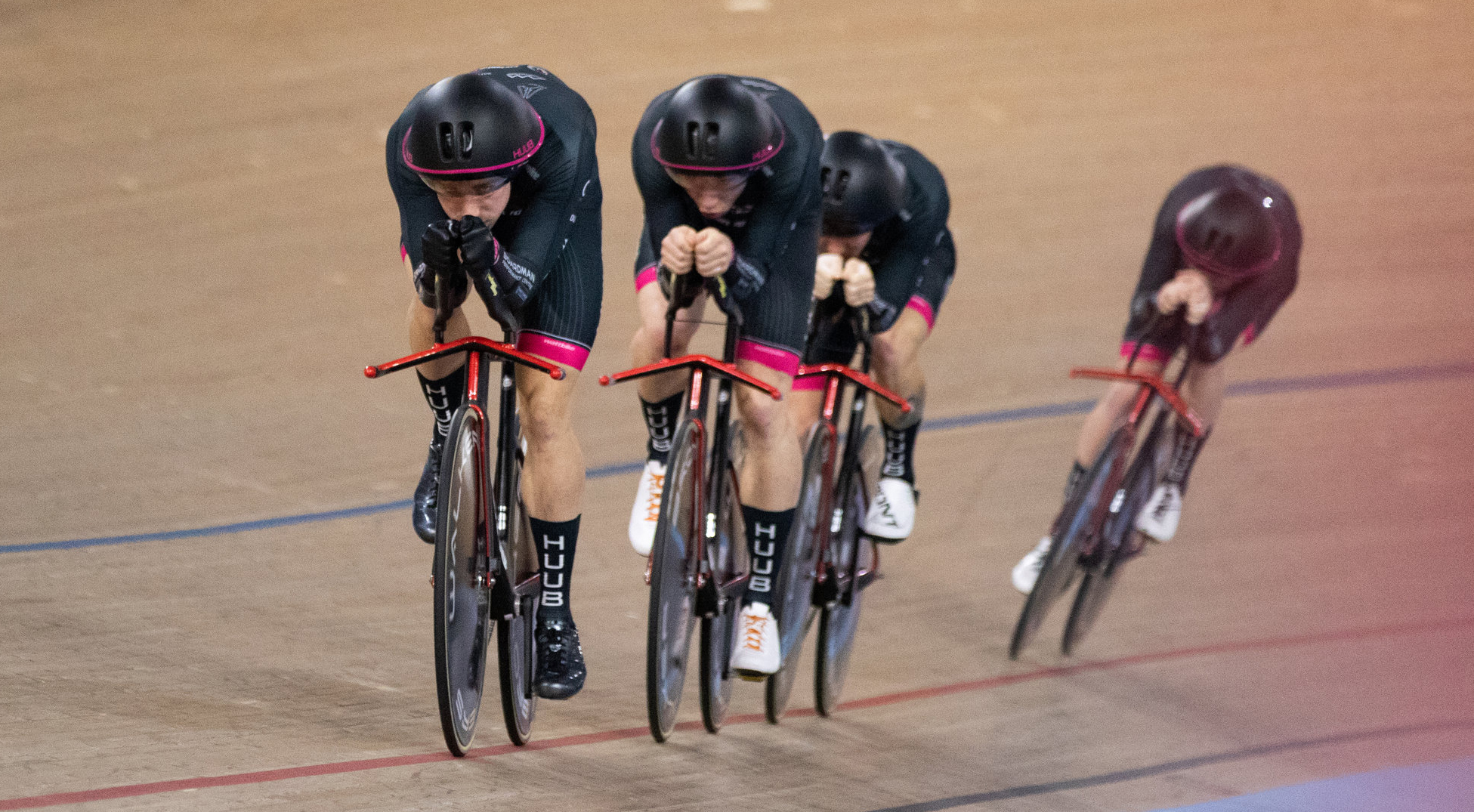 Starting off as Team KGF, the Derby quartet have been shaking things up from the start and their success was one of the headline stories in mainstream press of 2017. The Derby based track team first came to everyone’s attention at the British National Track Championships when they beat the British Academy riders, competing as 100% Me to the team pursuit title.

In January 2018 they beat Russian team Lokosphinx to Gold in the Team Pursuit in Minsk, Belarus, and two of their members, Dan Bigham and Charlie Tanfield gained selection for Great Britain at the world championships in Apeldoorn.

For the 2019 season, a new incarnation in the name of Hubb Wattbike was formed. Largely due to their worldwide success, the nucleus of the team of Dan Bigham, Jonny Wale had been joined by the Scottish rider John Archibald, and Charlie Tanfield standing in for brother Harry due to his signing to Katusha, and a host of sponsors, buoyed by the teams success. Their aim is to break the World Pursuit record while retaining the ethics and make-up of the team.

For Walker Brothers, it’s allowed us invaluable feedback as our wheels are tested at the cutting edge of competition and provides us with the data we need to make our products faster, lighter and more reliable than ever before. Head over to huubwattbike.com for more info. 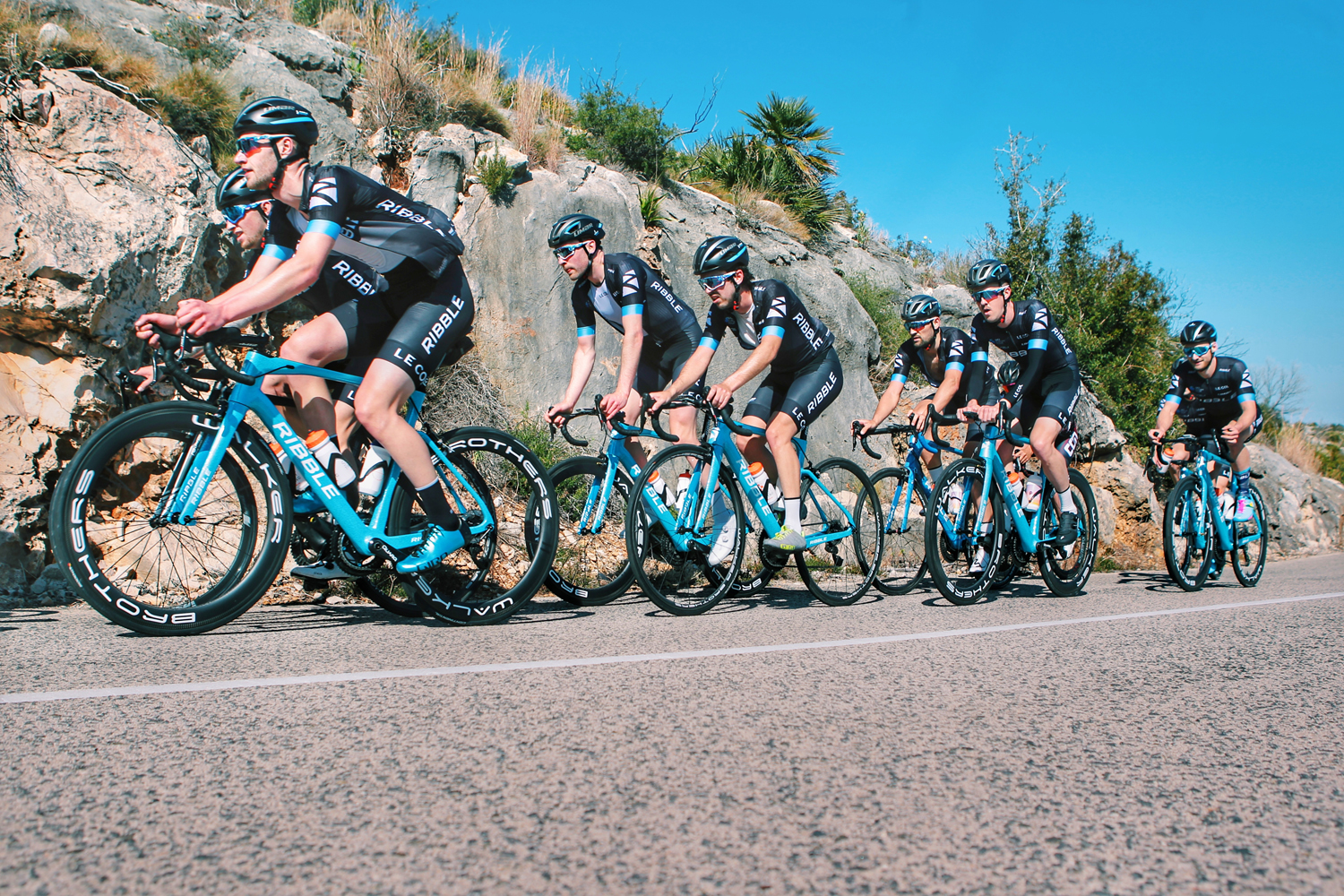 Ribble Pro Cycling was formed to provide a platform for developing riders and allow riders competition at a global level. With one of the most international calendars in British teams, it allows riders with the ability and ambition the chance to move beyond the small UK domestic scene. Having undergone various name changes over the last few years the core of the team remains unchanged and still delivers the ability to compete on a global scale.

Late 2018 the team were boosted by the news that they had achieved UCI status  and have competed in events in Belgium, France, Poland, Spain, Qatar, Hong Kong and China amongst others. To commence the 2019 season, it was announced that Walker Brothers Wheels would be sponsoring the team with all their road requirements for the year. Already our Wideboy 58mm deep section wheel sets have been the weapon of choice and again, providing us with invaluable feedback as to how our products perform at the highest level.
http://www.ribbleprocycling.co.uk/

‘Having spent many years racing on the track, indoors, outdoors, around the UK and the world, I have used many different race wheels. Wheels that I have used throughout my time are the usual brands like Mavic, Corima, Fast Forward, Pro and various others. As established brands, you would expect them to perform well. And they do.

However, in 2015 I came across Walker Brothers and their Revo 1 disk wheels and 5 spoke front wheel I can whole heartedly say that these wheels are as competitive, if not better than the leading brands and definitely rival the kit at the Olympic level.

My reasonings for this include: their hollow structure of the disk wheels  means that they are super light. This means that the wheels are easy to accelerate and roll easily once up to speed. However, owing to the craftsmanship at Walker Brothers, the strength of the wheels is in no way compromised. Also, due to the wheels being built on to Shimano Dura-Ace hubs, the bearings are super smooth and the build quality is what you would expect from any major brand of wheels. Not to mention that because these hubs have been used, the wheels really look the part. Also, the Union Flag design on the wheels is perfect for a proud Brit like myself!’

In all, I am finding that the wheels are strong, lightweight, aerodynamic and agile and I look forward to putting them on my bike for every race in this upcoming 2016/17 track season and beyond. I love my Walker Brothers wheels and I am confident that everyone else will too! 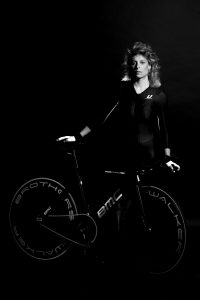 The former triathlete is another we can say we’ve been proud to work with ever since she started her campaign to break the UCI Women’s Hour Record in 2016. In October 2017, Bussi achieved her aim at a tilt at the UCI Hour Record but the self funded attempt, partially hampered by a bout of illness 5 days before, saw her fall agonisingly short by a mere 404 metres, recording 47.576km?
Since then Bussi has refined her position at the Mercedes-AMG Petronas F1 wind tunnel in Brackley, Northamptonshire Great Britain
Walker Brothers Ethereal Disc were chosen for the attempt in a totally independent test along with many other better known brands, and a again, we’ve benefitted from feedback which, due to our handmade discs, allows us to tailor the layup of a wheel to suit the individual.
Bussi is another of our supported riders with Olympic ambitions, a target no doubt assisted by her second place in the Italian National TT Championships in 2018, riding a Wideboy Disc and 88mm deep section front featuring our own handbuilt carbon aero hub.

When we stared supporting John Archibald, he was more often referred to as the brother of the better known Katie. His most notable achievement was taking the Silver medal in the men’s individual pursuit event at the 2018 Commonwealth Games. He reached the final, winning the silver medal. He is the brother of Scottish cyclist Katie Archibald.

Archibald made an immediate impact of the team pursuit when he joined and is now renowed for his three lap efforts at the end of a team pursuit to bring the rest home, a feat almost unheard of at that level.

Archibald gave an impression of his capabilities in Switzerland in December 2018 when he set a new sea level world record of  4:10:177, trimming four tenths from the four year old mark set by Australian Jack Bobridge.

The Danish time trial National Champion for the last three years, the rider, who stands 1.84m tall and weighs 68kg, has twice finished on the podium in Tour of Denmark time trials, in 2016 and 2017. In the international arena, Toft Madsen – a qualified physicist and nanotechnology engineer – finished 13th and 21st in the Men’s Elite individual time trial at the 2016 and 2017 UCI Road World Championships respectively.

Team Bäckstedt HotChillee was launched in 2017 as a merger of the HotChillee Development Rider Programmein SA and the Bäckstedt Cycling Academy in the UK. The aim is to foster young cycling talent in Europe and South Africa and creating a pathway into the pro peloton. 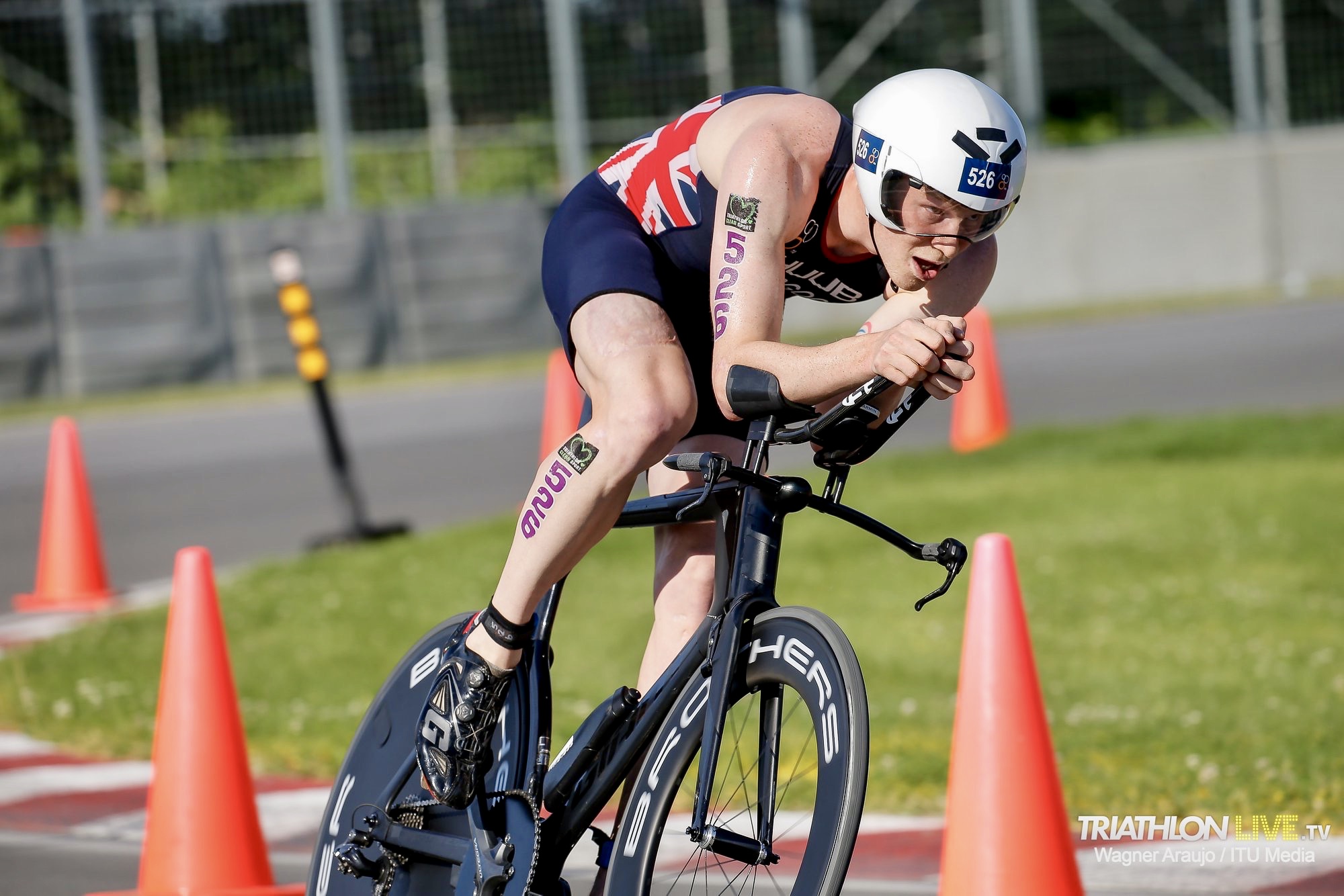 2019 has been a busy and mixed year for me, being a triathlete that dabbles in cycling it usually can be busy but I love what I do and find I am able to compete at a good level in cycling purely from my triathlon training.
Having worked with the HUUB WATTBIKE team over winter from a Para athlete side of things I aimed to hit the British Track Champs pretty hard for the Individual Pursuit (IP) to see if I could get selected for the Track World Championships. I was fortunate enough to use the Walker Brothers Ethereal Track disk wheels and have access to all the kit. I raced the British Champs being the fastest athlete in my class getting an IP un-official British record with a performance that gave me selection for Worlds.
Going to Worlds I was doing all my normal triathlon training with my coach Bex Milnes also coming out to support my swim & run sessions. I had no let up in my triathlon training and knew I could hit the power still without tapering my other sports. In Qualifying I had the second fastest time and got my spot in the gold medal ride off again the raigning World and Paralympic Champion. I went into the final with a bold approach of ‘go hard or go home’, however it wasn’t enough; but still… SILVER at a world champs in a discipline I have raced 5 times.

Transitioning the relationship with the track team over winter, I was able to ride for the team in the summer on the road in TT’s and transitioned (no pun intended) my learnings into triathlon.
Going into the Tri season I had good form and despite a mechanical in the first World Paratriathlon Series, managed to finis 2nd in Milan behind the Paralympic Champion Martin Shultz. I next raced a UCI Road World Cup in Belgium, one I had done previously on a course I knew well. With the extra upgrade packages of a Walker Brothers 88/disk wheel I powered to victory for HUUB WATTBIKE.

The next thing was the Tokyo Qualification window opening for Triathlon and so the next few races being important. We travelled to Montreal to hit the first race hard. With flying form I lead the swim, gained masses on the bike flying around the Canadian Grand Prix Circuit and had the best run of my career to just be pipped in the last part of the run by the rapid Stefan Daniel and Martin Shultz, the former running a 15:36 5km!!

The next race being the Tokyo Test Event I went to learn as much as I possibly could about the environment and course as possible, unfortunately the swim leg was cancelled due to e.coli levels in the water being too high moving the race to duathlon format. I suffer from a leg impairment whereas most athletes in my category have a below elbow impairment so the move from triathlon (where I usually get a gain in the swim) to duathlon meant I was at a major disadvantage to my competitors. With pressure off my back I enjoyed the course and pushed hard on the bike getting the fastest bike split across all categories (including all the tandems).

The last race of the year was to be the Triathlon World Championships in Lausanne where after I would race in the UCI Road Race World Championships. However with the unfortunate instance of being penalised on the bike leg meaning I had to take a 1min bike penalty loosing just over that in overall time. Along with that I lost my head a bit and didn’t have a great run so whereas I should have easily been within the top 5 in the race I finished 10th; my worst Worlds performance to date and not a reflection of where I am as an athlete.

With this performance I wanted to end the 2019 season on a better triathlon and so withdrew from the Cycling Worlds and competed on the same weekend in the Triathlon European Championships instead. Luck not being with me in September 2019 I punctured in the last 2km of the bike loosing a vast amount of time and running the technical last 500m of the course. So again finishing in a place not representative of my form.

Hopefully I have had all the bad luck for the next year (or two) from September and can show my full potential next year and in Tokyo.
Having the best possible kit is key for delivering at a high level and doing so with the support of Walker Brothers has helped me massively. Its down to fine lines these days within triathlon, to have the backing of such a good British company who have similar aims to me, of simply being the best, is amazing.