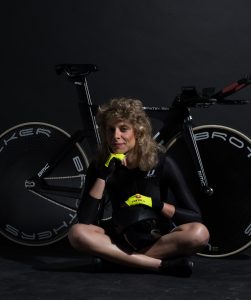 To come within touching distance of the UCI Hour Record is some achievement. To do so in a self-funded attempt, made within just four years of discovering the sport, and shortly after completing PhD studies, is still more impressive.

The facts of Vittoria Bussi’s attempt at the record, made in Aguascalientes, Mexico, in
October 2017 – an astonishing ‘debut’ that saw her fall just short of the mark set by Evelyn Stevens some 20 months earlier – serve merely as an outline to a complex and inspirational tale.

“I don’t ask for a salary. I don’t want to get rich with this attempt. I just want the opportunity to do it.”

Bussi’s attempt is also the story of a woman with prodigious physical and intellectual gifts – a doctor of pure mathematics, as well as a world class endurance athlete – who admits to an inhibiting shyness. It is the story of a husband and wife who put their lives on hold and their savings on the line to explore the full extent of her talent.

Most intriguingly, it is a story, as of writing, with no definite end. Bussi and her husband Rocco cannot afford another self-financed attempt at cycling’s blue ribband record, but neither are they prepared to accept defeat, having come so close at the very first attempt.

A bout of illness five days before Bussi hit the boards in Mexico, and pain in her diaphragm caused by an extreme riding position, now prevents her from drawing a line under proceedings there. How much stronger might she have been in full health? How much more efficient might her position have been made? And, more pertinently, how much further would she have ridden than the recorded 47.576km?

A mere 404 metres separated her from a dream two months ago. Since then, she has refined her position – with Endura’s support – beneath the expert gaze of Drag2Zero’s Simon Smart, at the Mercedes-AMG Petronas F1 wind tunnel in Brackley, Northamptonshire.

Endura’s interest is natural. With two successful attempts at the Hour Record already on its palmares (Alex Dowsett’s #PerfectHour in May 2015, and Dr Bridie O’Donnell’s success in January 2016), the Livingston brand’s Encapsulator suit has already proven itself uniquely suited to the task.

There is something more than technology at play here, however; a subtext that runs deeper than numbers, even if all parties – and especially Bussi – relish data and calculation. The appeal of the maverick outsider is not lost upon Endura, a brand that retains its renegade spirit, despite having grown to become one of the cycle industry’s biggest players.